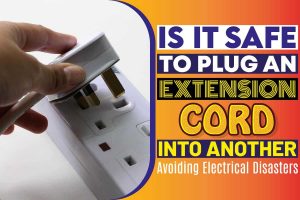 The current world runs entirely on electricity, and we would be set back hundreds of years without it. Electricity can only serve you if you have a conductor to carry it to where you want to use it.

An extension cord is the most sensible way to move the electrical current from an outlet to another point.

This cord might not be long enough at times, so you want to plug another extension into the first one. Is this safe? Let us get into it and understand this;

Is It Safe To Plug An Extension Cord Into Another?

It is not safe to plug extension cords into each other. When an electrical current passes through a power cable, there is a resistance produced by the cord.

The resistance causes heat to be generated in the extension cord, and plugging another extension cord will double the resistance. This will increase the likelihood of overheating or a fire sparking in your connections which could fry your equipment and even burn your house down.

You always have to be careful whenever you deal with electricity, be it appliances or extension cords. About 24,000 fires are caused by electricity in the US each year which makes it a significant concern.

It would help if you were more careful since electrical fires are challenging to put out, spreading faster and further away than other fires.

Here are some safety tips you should use to keep you and your loved ones safe from electricity;

A lower gauge reading indicates a higher capacity. Overloading an extension cord will cause increased resistance; sparking, and it could lead to a fire.

The extension cords gauge is an essential factor when considering a cord. If you get the wrong cord, you will have an underpowered appliance since the cable doesn’t carry enough current.

The gauge refers to an amp rating a cord is capable of sustaining. The lower the gauge number, the higher the extension cord’s amp rating. Here are the standard electrical gauges you can choose from;

This is the highest gauge, and it is meant for light duty applications for home use. You can use such a cord with hedge trimmers, fans, holiday lights, or any other services that don’t require a significant amount of power.

This is a general gauge for most medium-powered tools. Most home-use power tools fall under this category, including lawnmowers, vacuum cleaners, power drills, and household appliances.

This is the lowest gauge extension cord, and it was meant for heavy-duty tools that use an extremely high amount of electricity. This would be the best for industrial use since it would be overkill in a home setting.

For those with tools like air compressors, shop vacuum cleaners, saws, and power saws, this is the extension cord for you.

The cable is even bigger and heavier than the others to make it more efficient by reducing resistance.

Factors To Consider When Choosing An Extension Cord

The right choice of an extension cord will save you the stress of connecting the cord to another. It will also make it safer for you to use after the installation; thus, you need to consider the following factors before buying an extension cord carefully;

A suitable extension cord should have three prongs. The longer prong earths the socket to get rid of the static or residual current before the others go in. This protects your equipment and you from an electric shock due to power surges.

It is not safe to connect an extension cord into another. It is a common practice, but it doesn’t mean it’s correct or safe just because most people do it.  Fires caused by electricity are devastating, and they spread faster than usual; thus, you have to be extra careful.

You should look into your needs carefully before purchasing a cord to make sure it works perfectly.

Putting yourself in a position that needs you to improvise is what often leads to accidents and fires. Be smart about your connections and keep everyone, including yourself, safe. How Much Does A 65-Inch TV Weigh? Better Experience